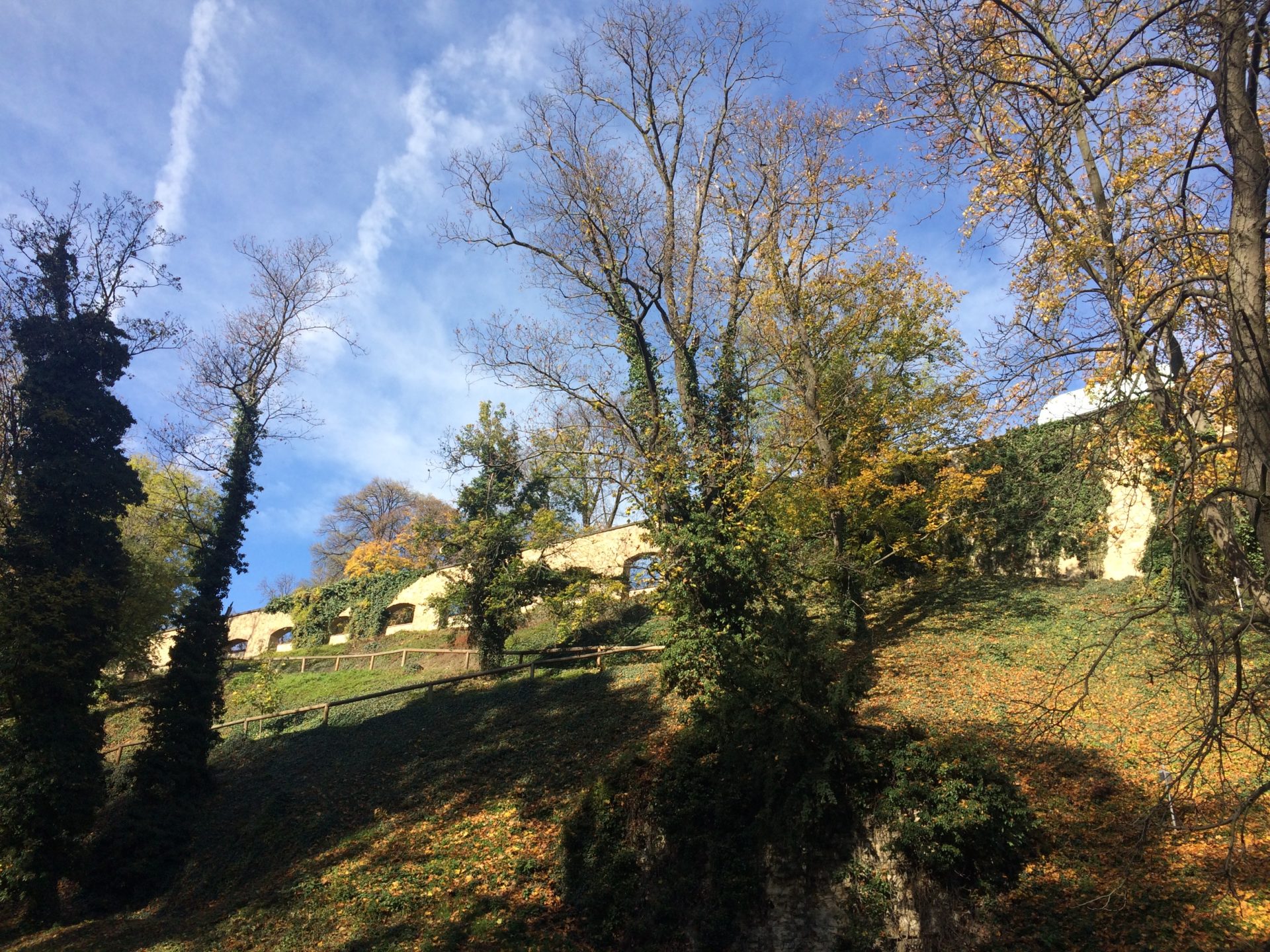 The Stag Moat is a natural gorge with an area of nearly 200 acres, which served as a defensive element of Prague Castle. Later there were vineyards in some parts of the Stag Moat. Deer were bred in the moat during the reign of Emperor Rudolf II. – since then it has been called the Stag Moat. Deer breeding ended here in 1742 when Prague Castle was occupied by the French army and its soldiers shot all 29 deer.

On the right, we can see the Queen Anne’s Summer Palace at the beginning of the Stag Moat – somewhat unusually from below. Despite the large trees, we don`t see the famous Orangery of architect Eva Jiřičná, nor do we hear the sound of the Singing Fountain. But since we know they’re there, we can go to see them when we come out of the Stag Moat. And just a short walk through the Stag Moat and we can see the walls of the Ball Game Hall.

On the left, you can see the fortification of the northern part of Prague Castle. It includes three towers. Daliborka, White Tower and Mihulka. Daliborka is named after Dalibor of Kozojedy, who was prisoned here. One Czech saying says that “Distress has taught Dalibor to play”. Dalibor had a violin in the prison and he learned to play. People walked towards the tower to listen to him and put gifts in the basket that he lowered from the tower window. We do not know if this legend is true, but we know that when one has to, one can do things that he never imagined he could. The Mihulka tower also served as a prison. During the reign of Emperor Rudolf II. there was an alchemical workroom.

Above our heads we now can see tourists walking across the Powder Bridge towards the Castle. By the way – the Powder Bridge has its name from the fact that gunpowder was stored in the Mihulka tower until the 18th century. The Powder Bridge was first wooden. When it burned down, a new stone bridge was built. At the end of the 18th century, the pillars were backfilled with a massive rampart. The 84-meter-long tunnel now passes through this rampart, where we even see one of the original pillars of the bridge at one point.

We come out on the meadow. On the right, we can see the Prague Castle Riding School in the distance, where exhibitions of paintings are held. On the left, we can see the Sternberg Palace, the exhibition space of the National Gallery. We come to the object where bears were kept at the time of the president Tomáš Garrigue Masaryk. A volleyball court is in front of us and a path to the small gate leading to U Brusnice street. Brusnice (cranberry) is also the name of a stream that flows through the Stag Moat.

And how do we get back to the city center?