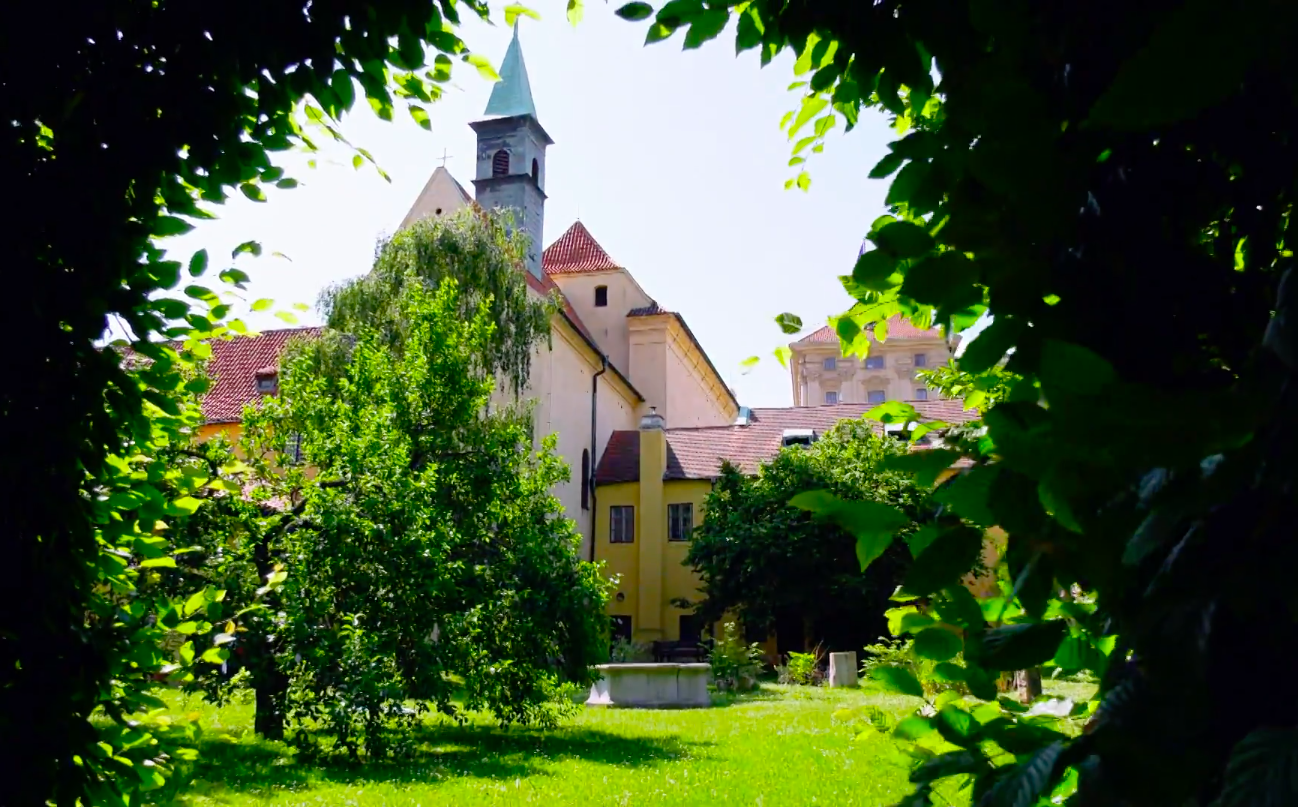 I have been living in Prague from the age of 10. Since then, visiting the Nativity scene in the Church of the Virgin Mary Angelic (Kostel Panny Marie Andělské) has been one of our annual Christmas customs.

It’s the morning of December 25th – it’s better to come in the morning. There will be too many people later. (In the Czech Republic the main Christmas holiday, with dinner and gifts, is December 24th.) First, lean on the heavy wooden door, behind which is a corridor leading to the church. Through the side windows, you can see the backyard of the monastery. You feel the cold and smell the church, wood and pine needles. Sometimes you hear the lamb bleating. (And if you’re lucky and Prague is now snowy, you can smell the snow melting off of visitors’ shoes.) Then there is another heavy wooden door in front of you and you find yourself in a church. And then it’s only a few steps to the room with the Nativity scene. Everyone in the queue waits calmly, smiling at each other, young children looking around the church in astonishment and asking, “When will we be there?”. The bigger ones are talking about what Baby Jesus brought them yesterday.

The history of the Nativity scene dates back to 1700. It is housed in a side chapel, consisting of figures of people and animals are in life-size. They are made of wood and straw and paper mache, they are dressed in real clothes and have faces made of gypsum and paper. It is all so Christmassy and charming! In front of the baby manger is a shepherd’s hat, into which you can throw several coins. The ram and ewe lying in front of the manger will nod their heads and bleat. And the more they nod, the more luck you’ll have until the next Christmas…

When we were preparing the filming of Kevin Alone, we also discussed where we will have a base camp. We moved around almost exclusively within Prague’s historic district, which is highly protected, so of course it made it much more complicated to film than if we had been somewhere in the suburbs or in the countryside.

So when we got an offer to set up base camp at the Capuchin Monastery, the stone fell from our hearts. Besides the fact that it was a special experience to go to Hradčany, this exceptional area, every morning to work, we got to know this inspiring place much more than in all that years before. (The photo, there is a place we would have earlier called “inside the Capuchin monastery”, today we fondly refer to as “our backyard”.)

The Capuchins came to Bohemia in 1599, a year later they founded a monastery in Hradčany. They belong to the Order of the Franciscans, begging brothers. Strict rules forbid them to own anything, even at the level of basic personal property, including clothing. Everything belongs to the order. In their “liberating poverty”, the brothers could fully concentrate on serving the miserable, the poor, and the sick. Since the end of the 19th century, they have also run Seraphim schools, named after Francis of Assisi (Seraphim), where boys from the poorest families could study.

In April 1944 the monastery was occupied by SS troops. After the war, the Capuchins returned to Hradčany to be expelled from there again by the communist totalitarian regime, coincidentally again in April, this time in 1950. Many of the brothers were then taken to internment camps.

The monastery returned to the hands of the brothers in 1991 and since then they continue their activities here – serving the less fortunate, the poor, and the sick. They also help by organizing benefit concerts in the refectory – musicians play for free and the gain from the concert always goes to some nonprofit organization. For people without a roof over their heads, battered women, substitute families or Jaroslav Ježek’s school for children with visual impairments. Capuchins continue with supporting of education even today – for example by accommodating students (boys) like in a college.

For more information about “How to live like a king in Hradcany and pay for it like a pauper”, check out our Don`t Waste Your Money category.

Gingerbread Nativity Scene in the Church of St. Matthew (“U Matěje”)