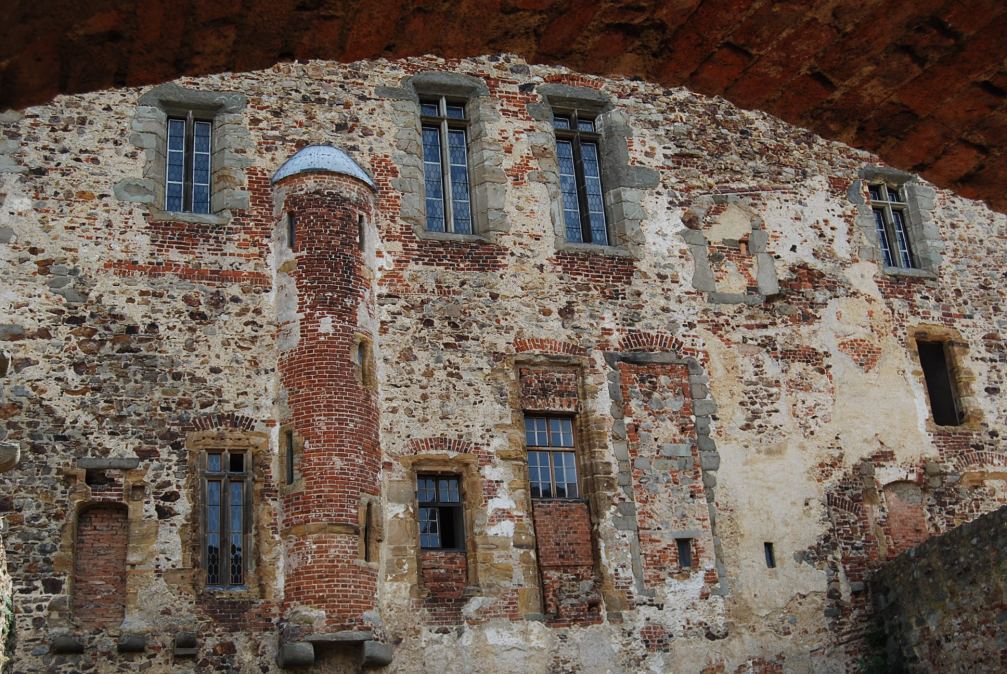 In the south part of the Bohemian kingdom, the rich family of the Lords of Rosenberg (Rožmberk) ruled, powerful enough to be a threat to the King himself. For years the Rosenberg`s manor had been damaged by groups of bandits, some even waging a private war against the Rosenbergs. One of these groups was led by the harsh, elderly and single-eyed warrior Jan Žižka of Trocnov. The Rosenbergs prosecuted Žižka for years, during which he was threatened with the death penalty. Some of his companions were even executed, but Jan Žižka still managed to escape. Though he had a slow crayfish on his coat of arms, he rode his horse like a dragon. He sought revenge with the Rosenbergs. Even as a boy, he lost his eye in the skirmish with the Rosenbergs.

It was on April 25, 1409, when Jan Žižka suddenly appeared at Točník Castle to have an audience with King Wenceslas IV. That day the king not only reprieved him, but he accepted him into his Royal Court and made him a courtier. The robber and the experienced warrior would eventually become the commander of the Royal Guard and the Secretary to Queen Sophia (Žofie). He faithfully served his king and queen until the Hussite wars.

On July 31, 1419, Žižka left the king and led, in agreement with the priest Jan Želivský, an attack on the New Town Hall. During this attack, new royal councilors were thrown from the town hall windows into a crowd of men holding their lances ready. King Wenceslas IV became so enraged by the news of the defenestration, that he suffered a fatal stroke.

After the king’s death in 1419, Žižka, already an old man, became a Hussite head commander. For the next six years, he led the Hussite troops, defeating two pope-led crusades and not losing a single battle, despite losing his healthy eye and going blind. After Žižka’s death in the year 1424, his soldiers mourned so much, that they began to call themselves Orphans.

King Wenceslas IV. suffered from burning in his throat and chronic thirst as a result of his former imprisonment and poisoning attempts. Since he was king, he did not quench his thirst with water but with alcohol. He finally died as a result of alcohol use and stroke on August 16, 1419.

After his death, the body of the king was taken to the Zbraslav monastery and stored in a crypt. The following year, when the Prague inhabitants occupied the monastery, they destroyed and looted its contents. They raised the king’s body from the temporary grave, took his head, and theatrically forced it to toast with them. When they failed in their attempt, they played bowling with the king’s head instead.

After this excess, the king’s body was hidden by the local fisherman Moucha in his vineyard. Only in 1424 was the king’s body transferred from Zbraslav to Prague Castle, and so Wenceslas IV. finally found peace near his father Emperor Charles IV. in St. Vitus Cathedral.

King Wenceslas IV was a passionate hunter. He imported new breeds of dogs, such as greyhounds, to the Czech kingdom. Dogs accompanied him at every step, he adored them above all else. They thoroughly guarded their king.

On New Year’s Eve in 1386, his wife, queen Joanna of Bavaria, came to visit the king in his bedroom. As she entered the king’s bedroom, one of the king’s loyal dogs jumped at her and bit her throat. The queen died as a result of this injury.

After the death of Queen Joan, King Wenceslas had one kingfisher removed from his personal coat of arms (a wreath with two kingfishers in the middle) as a symbol of loyalty to the deceased queen. Three years later he married the niece of his deceased queen, Sophie, of the same family.

An Obsession with Margarets

King Charles IV had a younger brother, Jan Jindřich (John Henry). In 1330, he was married as a boy to Margaret, Countess of Tyrol. When both of them had grown up, his wife Margaret shamed him throughout Europe by publicly declaring that he was not doing his marital duties. This accusation was then examined by a special committee composed of representatives of the nobility and clergy. It cannot be of surprised that the young man failed in his performance in front of the committee. His wife then had him driven out of the castle. The future Emperor Charles IV, brother of Jan Jindřich had to liberate him by military force and brought him to Bohemia. In Bohemia, he was hidden from that European shame in the castle Žebrák.

Jan Jindřich stayed at Žebrák Castle until 1349. He had a chapel built on it and consecrated it on behalf of St. Margaret and Apollinaire. A new wedding for Jan Jindřich was also arranged at Žebrák. Another Margaret became the second wife – this time Margaret of Opava. In this marriage, Jan Jindřich eliminated his disgrace because six children were born and Jan Jindřich became the founder of the Moravian branch of the Luxembourg ancestry. The Moravian Luxemburgs became competitors for the Czech part of the Luxembourg ancestry, and Jobst of Moravia even became King of Rome in 1410, instead of his cousin, Czech King Wenceslas IV.

In 1363, Jan Jindřich married for the third time and got his revenge for the disgrace caused by his first wife. His new wife, again Margaret, this time a Habsburg, was the widowed daughter-in-law of his first wife. (His shame was erased long ago by six children from his second marriage and also by his illegitimate son John, later bishop of Litomyšl.)

The stories of Točník and Žebrák castles were told us by their castellan, Mr. Petr Zemánek. Thank you!

Clicking on the castle’s name will take you to its website:
Žebrák
Točník