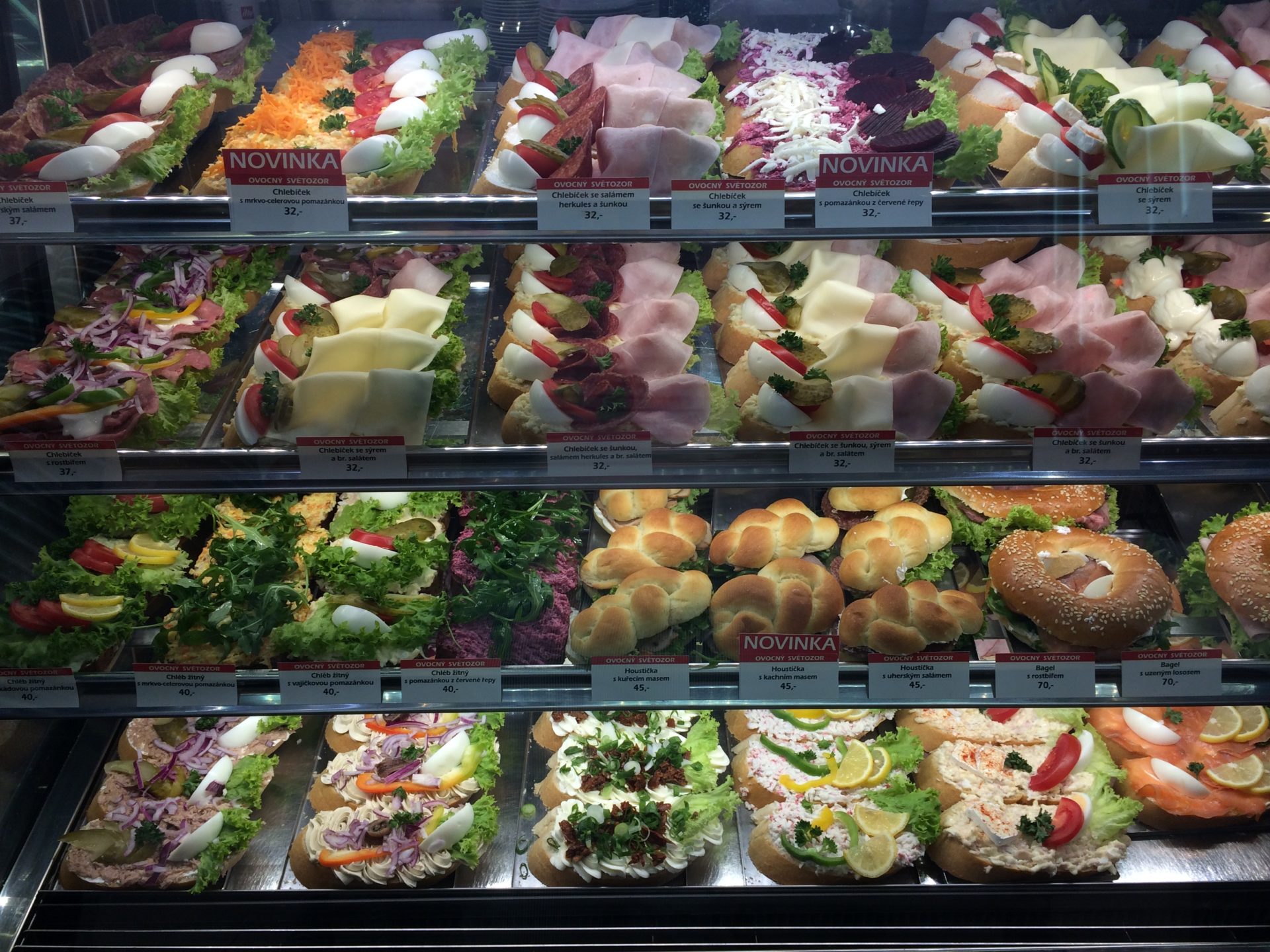 One of the biggest excitements when traveling abroad is, without any doubt, to try and enjoy some new food. A local cuisine is always different tasting than it’s American version, if there is one. The ingredients are not the same, spices may not be the same, not to mention the atmosphere.

Every time I travel to Czech with my family, we all make sure to eat all the following tasty treats not once, but several times during our stay. They are not as exotic as you may find some specialities in other countries around the world, but they may still surprise you with their fresh and delicious taste.

Let us know in the comments below which one is your favorite. 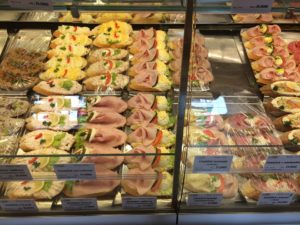 These little sandwiches were introduced first in Prague a little over 100 years ago when Mr. Jan Paukert, the owner of a deli shop at Narodni trida, used to deliver his products to many customers around the city. One of the customers was his friend, an artist Jan Rytir Skramlik, who didn’t like tiny, one-bite snacks and suggested something larger, two or three bite pieces he could eat while painting. And the idea of the open face tea sandwiches was born, loaded with lobster, smoked salmon, trout and other specialties. Some time later, Mr. Paukert was delivering these delicious treats to the Prague Castle to our first president, Tomas Masaryk.

You can hardly attend a party, meeting or even visit your friends in Czech without being served this cute versions of traditional sandwich. Usually a slice of white French bread has some type of spread or salad, and is decorated with cold cuts, cheeses, eggs and pickled vegetables. The selection grows each year, satisfying a new demands of customers, adding more goat cheeses or some vegan versions. You can find a good selection in local deli shops, grocery stores and even sweet shops and try two or three for a quick lunch or a tasty snack.

When I was growing up in Czech, one of my favorite dinners my mom or grandma used to make were traditional Potato Latkes. Peeling and shredding a large bowl of potatoes used to look to us kids like a huge chore but the reward was wonderful: hot, golden brown Latkes larger than our hands, crispy on the outside and tender inside. We ate them until we were ready to explode.

The basic dough is very simple and consists of above mentioned potatoes, eggs, flour, marjoram, onions, garlic and salt. People also sometimes add cut up hod dogs or ham, or serve Latkes with meat. The batter is then spooned into a frying pan, forming a little pancakes and fried until golden. It is a very satisfying snack you can grab during your strolls around Prague.

While crepes originated in a French region of Bretagne several centuries ago, they were not known or common in Central Europe until late 17th century. During that time, a Hungarian aristocrat Esterhazy travelled to Paris with his personal chef Palaccini for a visit. Palaccini tasted crepes during their stay for the first time and he really liked them – very thin and served with sugar, but he decided that they needed an improvement. He made them thicker, covered them with strawberry jam, rolled them up and decorated with whipped cream and fresh fruit. Unfortunately for him and everyone else at that time, chocolate wasn’t known in Europe until 19th century.

Today’s versions of palacinky still include jam and whipped cream but also Nutella, cream, chocolate and powdered sugar, and can be also found in little shops around Prague. They are best tasting on a plate in some quiet spot, with a cup of coffee, while enjoying one of the many scenic views Prague has to offer. Yummy.

An American hot dog is usually served inside a very soft bun and topped with many different toppings such s onions, relish, and cheese. Prague also has it’s own version of hot dog and it is definitely worth mentioning. Hot dogs themselves are usually not cured, made out of a mix of finely ground pork and beef with added spices. All natural casings are filled with the mix and first smoked and later cooked in the steam, before packaging.

There are two most common ways you can see hot dogs to be served on the streets of Prague or in little shops. The more traditional way is 2 hot dogs on a plate with mustard and sometimes horseradish and a piece of rye bread. The other way will remind you more of an American hod dog – inside of a roll which is harder and crunchier than our typical hot dog bun and inside is covered with either mustard or ketchup. The roll fits right into your hand so you can eat and walk at the same time.

It is not possible to walk around Prague and not to see many little bakeries and their shops as they are really everywhere. It is very common for Czechs to pick up some pastries on their way to work and eat them later for breakfast, just like we do here with doughnuts. Besides The Czech versions of doughnuts, you can also find there croissants, sweet rolls with nutty fillings, kolache, and buchty.

Traditional Czech kolache are flat and round and filled with fruit, jams, farmer’s cheese or poppy seed filling, while buchty look a little bit like biscuits and are also filled with similar fillings like kolache and covered with powdered sugar. They are made fresh early in the morning and you can often buy them in those little shops in the morning still warm and smelling like a little piece of heaven. What a treat! 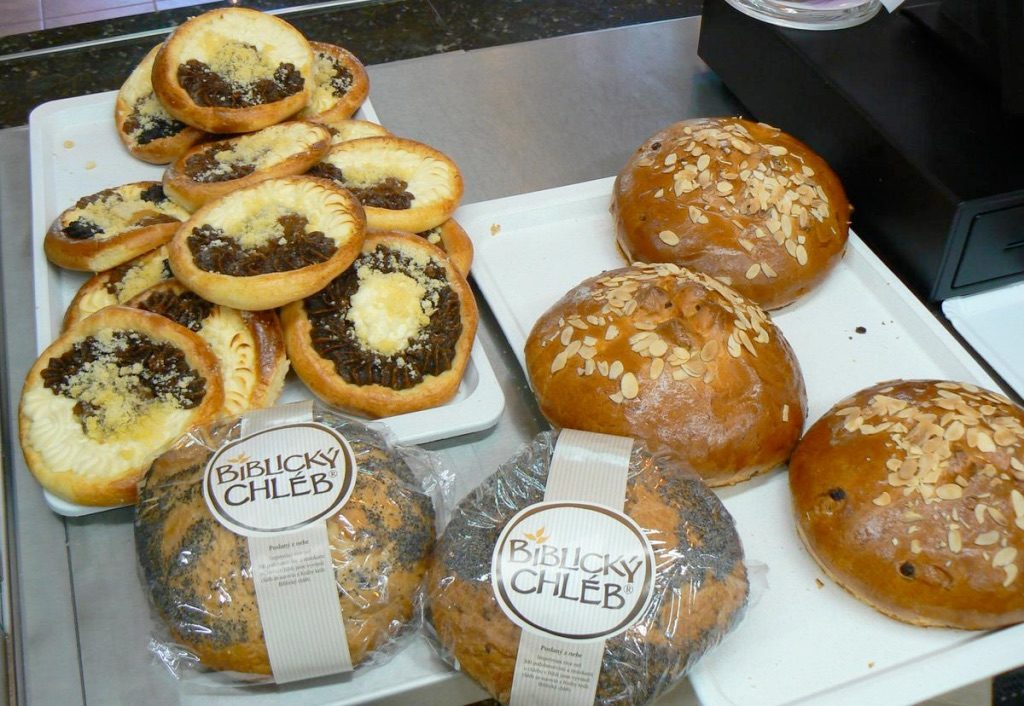 Photo: Hospital of the Sisters of Mercy of St. Boromeo

One of the best Czech specialties are little sweet shops, usually called Cukrarna. It is believed that sweet honey cookies were made in the region of Czech Republic already in Middle Ages but the production was limited and aimed mostly at aristocrats and rich people. Later on, mainly immigrants from other parts of Europe brought with them recipes and knowledge how to make different types or cakes and desserts. Over the last few centuries, Czech people mastered this trade and the selection of their fantastic-tasting treats is quite impressive. Since the sweet dessert is usually eaten not after dinner but with an afternoon cup of coffee or tea, the little sweet shop setting is perfect for this occasion. You can find there many chocolate, fruit or creamy pieces of sweet delight, sometimes even spiced up with little bit of alcohol. The only problem you will have there is to choose a piece or two as they all look and taste fantastic!

While most Czech people are definitely meat eaters and you can find tons of meat products everywhere you look, the breaded fried cheese is one of the specialties everyone loves. Most common cheese to be used is Eidam cheese which is cut into half-inch slices and dipped in flour, beaten eggs and bread crumbs, and fried until golden. Almost all restaurants in Prague and other cities in Czech have fried breaded cheese on their menu, it is usually served with potatoes and tatar sauce (not to be confused with tartar sauce as the taste is different). We will cover restaurant dishes later in another blog. Besides in restaurants, you can also buy fried breaded cheese in a bun, just like a hamburger, in many burger stands around the city. So if you would like to buy a typical Czech food on the go, this would be it.

Trdelnik, or a cinnamon pastry is the most common product sold in the street of Prague. While many signs state that this is a traditional Czech pastry, these claims are questionable at least. Trdelnik’s origin is more likely either in Slovakia in the 19th century, or even some parts of Hungary. But the most important thing to know about Trdelnik is that it is without any doubt the most popular Czech treat you can find on the streets.

So what is actually Trdelnik? It is a kind of spit cake, made out of stripes of rolled dough, wrapped around the stick and grilled on open fire. When it’s cooked, it is covered in sugar and cinnamon. You can buy it filled with sweet cream or ice cream. Delicious and very filling!

Kielbasa is also sold in many stands around the city and you can find them if you simply follow the amazing smell. And do you know the main differences between a hot dog and a kielbasa? While hot dogs are finely grounded and also cooked, the kielbasa contains bigger chunks of meat, is only smoked and more spices are added. To warm it up later, you can cook kielbasa in boiling water or grill.

They are usually served with bread or a hard roll and mustard. And what is the best drink to wash down the spices and grease? Well, since you are in Prague, you should definitely try one of many famous Czech beers!

No matter which of these foods try, you will definitely not be disappointed.

Nobody Can Stay Hungry Here

Gingerbread Nativity Scene in the Church of St. Matthew (“U Matěje”)