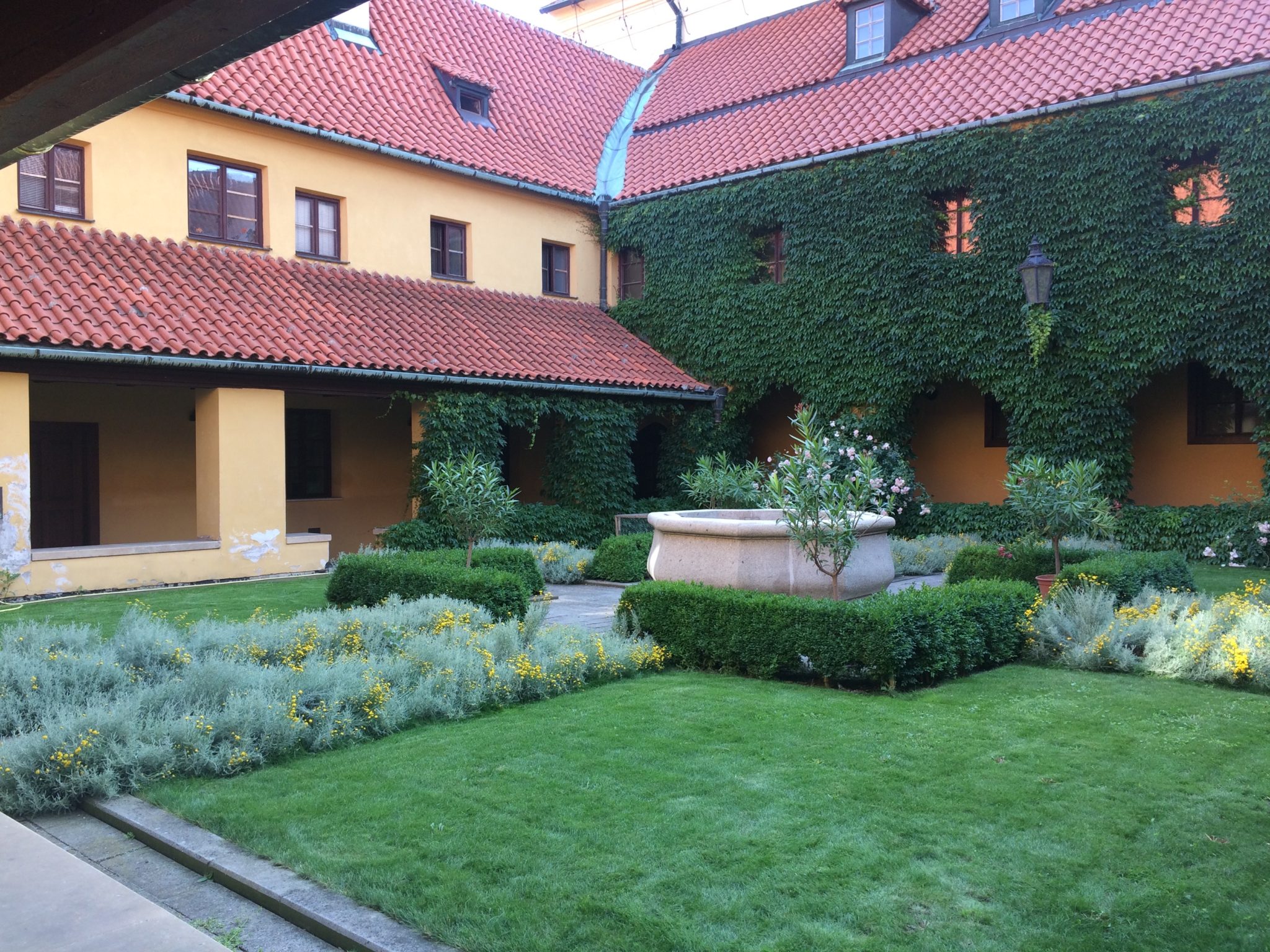 Most people who know the Church of the Virgin Mary Angelic in Hradčany (Kostel Panny Marie Andělské) perceive it only as a church where they go to see the Nativity scene at Christmas. The rest of the area of the Capuchin monastery is surrounded by a high yellow wall, which is discontinued only in a few places by heavy dark brown wooden doors.

The Loreto Square (Loretánské náměstí) is a quieter part of Hradčany. The main stream of visitors move up directly through the the Loreto Street (Loretánská ulice) from Pohořelec to Hradčanské Square (Hradčanské náměstí) and to the Castle. People who head down the hillock to the world-famous Loreta are separate from them.

But when visitors disappear behind its high door, and their steps and voices cease, they are surrounded by a special, dignified silence. You can hear only the unobtrusive sounds of the Loreto carillon bells in the Loreta Tower (if you stand close by, at the top of every hour).

The feeling of this place houses a significant imprint of history. This is intensified when you discover that in the courtyard of the monumental Czernin Palace our Foreign Minister Jan Masaryk, son of the first Czech President Tomáš Garrigue Masaryk, died after falling out of the bathroom window. (This happened on March 1948, just two weeks after the Communist putsch, and there are too many reasons to suppose that he was assassinated.)

Perhaps you will also discover that in Capuchin Street (Kapucínská ulice), just a short distance from the arcades next to the entrance to the Capuchin Monastery, there was an object called the Hradčany Small House. Despite its poetic name, it was the cruelest torture chamber in which the Communists had been torturing opponents of the regime since 1948. (Prisoners who were also tortured by the Gestapo during the war, reported that the communist one was much worse.)

Stories about supernatural phenomena have been associated with this place since time immemorial, from the very beginning of Christianity in Bohemia. It is uncertain whether there was an execution site on Loreto Square, as some rumors say. Archaeological surveys have also shown a considerable number of graves here – a burial place used mainly in the Middle Ages, but there is also evidence of graves from the 11th century and some even from the end of the 7th century, known as “the early Slavic period”.

The quiet, lower part of Loreto Square simply has a special atmosphere that forces you to slow down your steps as you walk through towards the Capuchin Monastery. (Maybe also because, if you do not slow down, you might twist your ankle on the ancient cobblestones there.)

Don’t let the tranquility and silence fool you. Every now and then you can hear the unmistakable sounds of suitcase wheels rolling on the pavement in front of Loreto, a concert of modern plastic wheels skipping along medieval cobblestones. The small door, located in the large gateway of the Capuchin Monastery, clicks, and new visitors enter it.

Try not to wonder why men, women, children, and whole families enter the monastery of the order of brothers. How could such a seemingly tranquil, hidden place see so much foot traffic? Just take out your mobile phone and browse the Capuchin’s website for hard-to-believe offers for accommodation – in one of the most beautiful places in Prague and at a price that seems too good to be true.

The Capuchins offer a total of 56 beds in 14 rooms at a price that is remarkable – and unbelievable given the location. It varies according to the number of nights and the number of people in the room – if you are four in the room, you will pay 300 crowns per person per night. However, if you sleep in your own sleeping bag, this price will drop to 200 crowns per person (for a single room it is only a little more, 250 crowns). And as if the benefits were not enough – the accommodated people have a 60% discount on access to Loreto, the place of pilgrimage managed by the Capuchins…

In July and August, the accommodation capacity is increased by 17 single to triple rooms as students’ rooms become vacant. During the academic year, students pay CZK 2600-3700 per person per month, depending on the room type. Moreover, they help clean up common areas and minister twice a month in the church.

In recent years it has become fashionable to sell anything with a story in the Czech Republic. Traders do not sell ordinary goods to people. Instead they sell; a car with a story, cosmetics with a story, furniture with a story. This is a great marketing tool today that makes it clear that this product is better (and more expensive) than the ordinary. (One of my friends is the author of a very apt saying: “I don’t want a marmalade with a story. I just want to have breakfast normally.”)

The Capuchins do not need any marketing tricks, nor do they need to compete with their story. They just offer accommodation at an incredible price, at an even more incredible location. So if you want to lodge like a king and pay for it as a pauper, just click here.

PS: When we started thinking about shooting the movie Kevin Alone and launching this blog portal about Prague, we realized one very important thing. That we have one really rare advantage – that we are at home “on both sides of the ocean”, in the Czech Republic and in America, with all the benefits of having knowledge about society and people in both countries.

And of course, we know that satisfaction with accommodation is a basic condition for enjoying your whole holiday in a new country. Certainly, we do not want to be just an accommodation portal, but we want to draw your attention to interesting opportunities from time to time. In the section Don`t Waste Your Money, you will be surprised by the quality you can get at low prices, or in the section Discounts and Advantages, we offer numerous options on interesting discounts and other advantages.

In an effort to live up to our slogan (located down in the footer), that “Prague is one of the most beautiful cities in the world”, we want to present it to you in a unique way and create a dialogue with you about the city. But most importantly, we would like to be your guide through Prague, so that you have only a single task: to enjoy your carefree holiday.