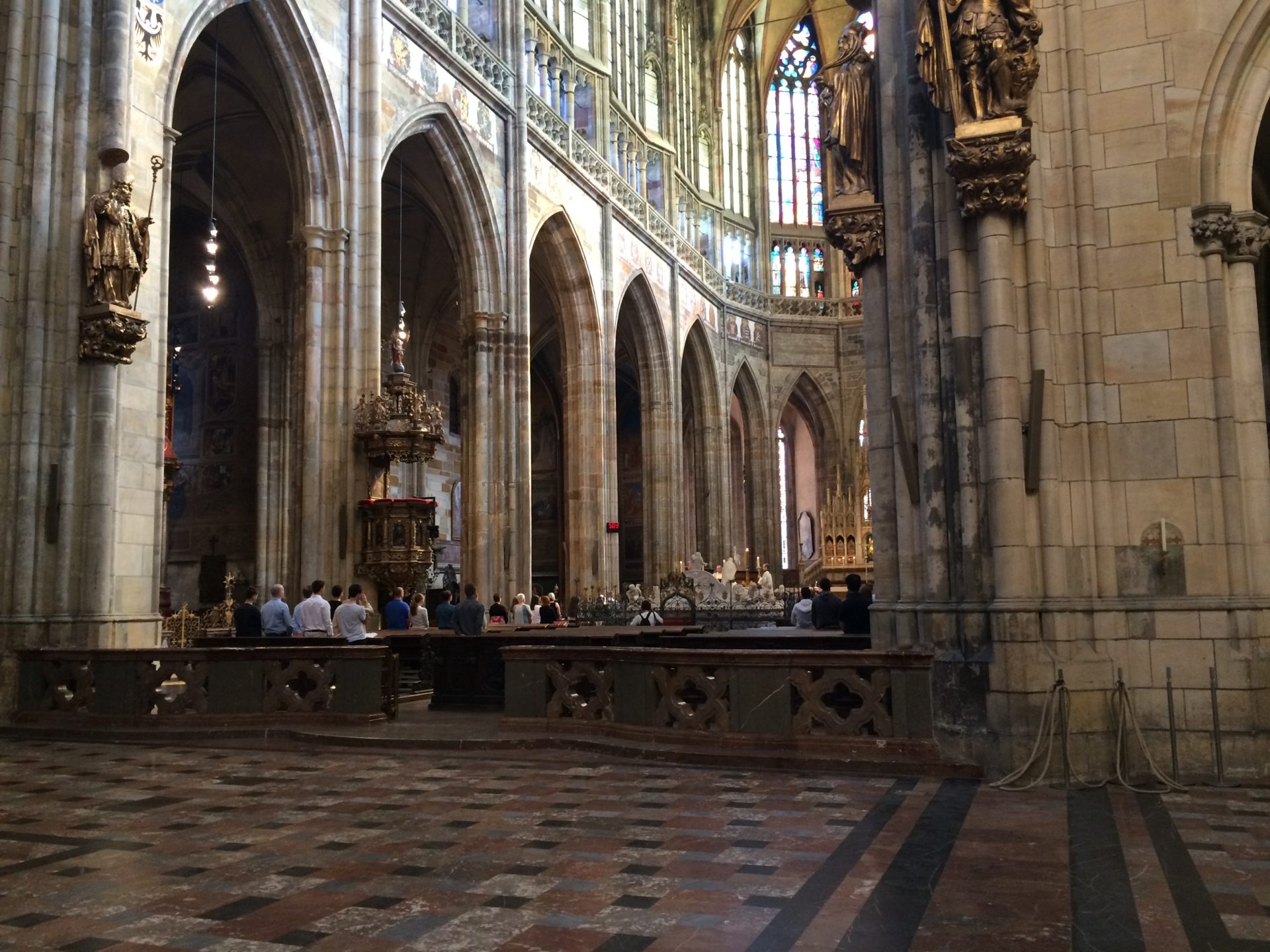 St. Vitus Cathedral (full name Cathedral of St. Vitus, Wenceslas, and Adalbert and Virgin Mary) is the dominator of Prague Castle, not only because its Southern tower is 96.6 meters (105 yds)  high and is the third-highest church tower in the Czech Republic.
It took a whole one thousand years to build the cathedral. In the beginning, there was a small Romanesque rotunda, founded by Duke Wenceslas in 929. Duke Wenceslas was later proclaimed a saint and is now the patron of the Czech land. The foundation stone of the later cathedral was laid in 1344 and the construction was finished in 1929.
After 1989, the cathedral’s ownership was disputed between the state and the church, and resulted in no clear, rational solution. The dispute finally ended in 2010 with a peaceful reconciliation between the state and the Roman Catholic Church. Both are now participants in the administrative and operational functions of the cathedral.

Honestly, 40 years of socialism in our country (1948-1989) resulted in quite a significant deflection from faith in God. The communists were very well aware that faith gives strength to humans and they needed people to be obedient and fearful instead. Therefore, they persecuted churches, orders, and priests of all churches. That`s why only about 30% of Czechs now claim to have faith in God.
Regardless of their relationship with God, probably all Czechs perceive St. Vitus Cathedral as a symbol of Czech statehood and the most important church in the country. That’s why this church, intimately and simply called “Saint Vitus”, is so dear to us.
Believers and nonbelievers, Czechs and tourists alike – crowds of people go to St. Vitus Cathedral daily. It is not easy to find a calm moment to think among so many people. Rather, it’s almost impossible. But there is one exception. If you go to the cathedral for worship, you will have it, along with the other participants, to yourself. Sermons are held in the Czech language, but as we know, language is irrelevant to a relationship with God.

By the way – there are two energy points on the floor of the cathedral. Both are in the side aisles of the cathedral. One is just to the left of the entrance, in front of the large stained glass window. The second one is close to St. Wenceslas Chapel (the one from which the door leads to the chamber with the Czech crown jewels). They are small brass points, less than half an inch in diameter. But as you stand up on that point and wait a moment, you will feel the heat and energy in your leg.

The heroes of our film Kevin Alone in front of the door leading up to the staircase to the chamber with the Czech coronation jewels. That door has seven locks, the key to each lock is kept by: the President, the Prime Minister, the Archbishop of Prague, the presidents of the upper and lower house of parliament, the provost of the Metropolitan Chapter and the Mayor of Prague.

U.S. Embassy in the Czech Republic