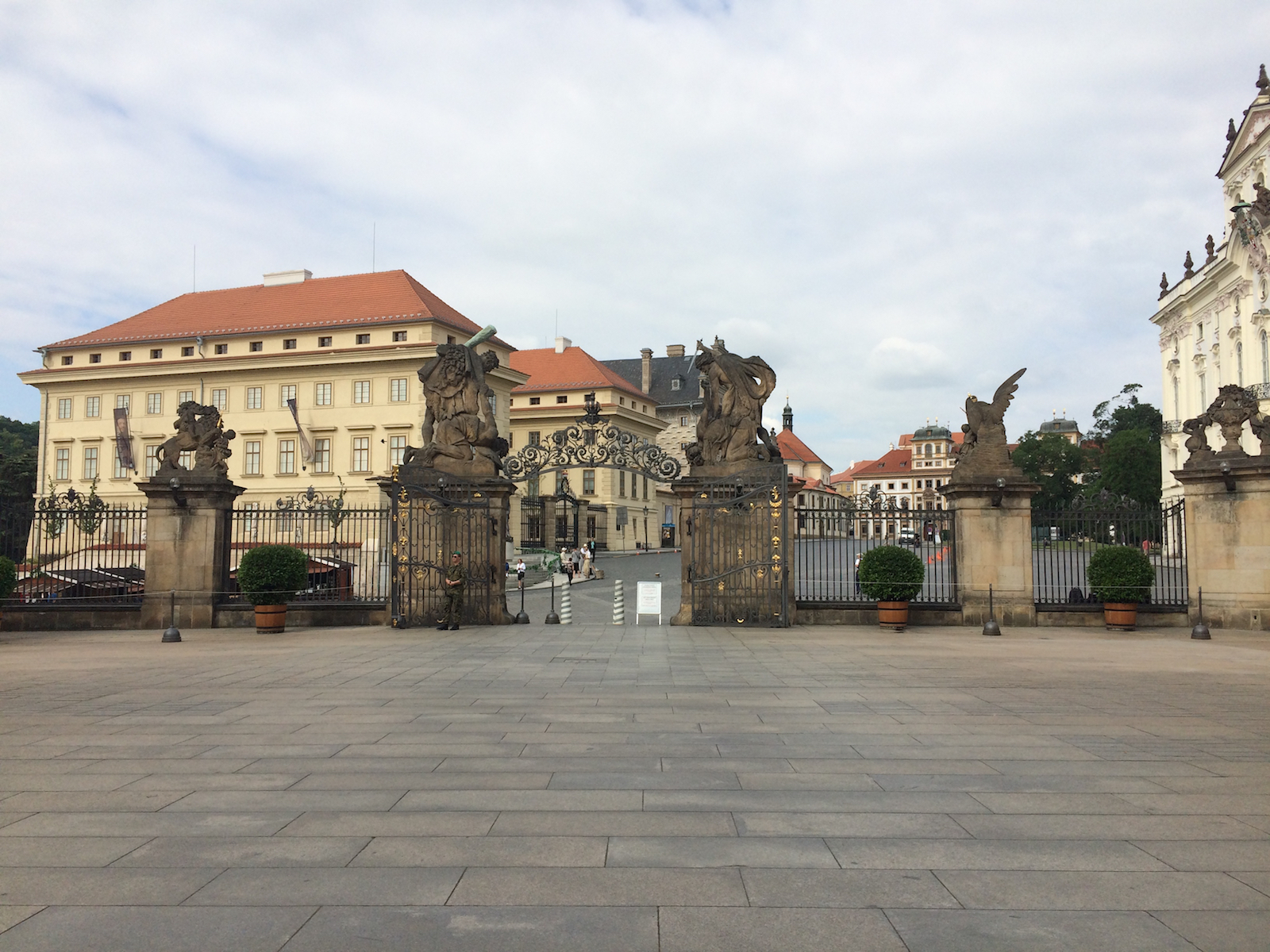 Prague Castle (3rd Courtyard) – Old Castle Steps – at the end of the stairs turn right – Klárov – you will pass the metro station Malostranská – U lužického semináře (you can take a rest at Vojanovy Park, quiet and calm place in the city center) – and there is only a short street Na Kampě and you will reach the stairs leading to the Charles Bridge

This is probably the easiest way – just get on a streetcar, enjoy the sights you`ll see behind the window, and you’ll be there in a few minutes.

Go through the second courtyard of the Prague Castle and walk down the street U prašného mostu – on the main street called Jelení (The Deer`s Street) get on the streetcar 22 or 23 and enjoy the sights you`ll see behind the window – the third stop from this one is Malostranské náměstí (Lesser Town Square) – get out here and look around where the most tourists are: this is the street Mostecká, leading to the Charles Bridge.

If you want to reach the Charles Bridge from the Old Town and not from the Lesser Town, the start of your journey will be the same. BUT you have to get off the streetcar at the stop Malostranská (don’t be confused with the similarity of names of stops “Malostranská” and “Malostranské náměstí” – they are not the same name, although the names sound very similar) and then you can take a short pleasant walk across the Mánesův most. (The bridge has its name after the painter Mánes, but not even Czechs don’t know “Who is who?” – because there were 5 painters with this surname: Antonín, Václav, Josef, Quido, and Amalie and all of them were relatives. Father, his brother/uncle, sons/nephews/brothers, and the only one woman, daughter/niece/sister.) At the end of the bridge turn right and go a minute or two up the river – here you go along the Alšovo nábřeží (Aleš`s Embankment) named after another Czech painter of the 19th century, Mikoláš Aleš. At this point, the Charles Bridge is just around the corner. Turn left onto Platnéřská street and after about half a minute turn right. There are approximately 100 steps remaining to get to Charles Bridge.

This path is the same as path number 4 – up to the moment “at the end of the bridge turn right”. At the end of the bridge don`t turn right, but go straight across the square. The square is named after Jan Palach, a student of the Faculty of Arts, who in 1969 burned himself in protest against the occupation of our country by five armies, under the command of the Soviet Union (the Faculty of Arts stands right in front of you). You are entering Kaprova ulice and if you`ll go straight for about 3 minutes, you`ll come across the Jan Hus Memorial on the Old Town Square.

This path is the same as path number 4 – except, at the end of Manesuv bridge, go straight across the square instead of turning right. The square is named after Jan Palach, a student of the Faculty of Arts, who in 1969 burned himself in protest against the occupation of our country by five armies, under the command of the Soviet Union (the Faculty of Arts stands right in front of you). You are entering Kaprova street and if continue to go straight for about 3 minutes, you will come across the Jan Hus Memorial on the Old Town Square.

You can use any of the paths described here from Prague Castle to the Charles Bridge – for example, route 3; Cross the Charles Bridge, turn right and go up the river. Enjoy this beautiful walk. Continue along the Smetanovo river bank, where you can enjoy the best view of Prague Castle – the embankment is named after one of the greatest Czech composers, Bedřich Smetana, author of the symphonic poem Má vlast (My Country). At the end of the embankment, you will see the building of the National Theater, which opened in 1881 featuring the gala premiere of the opera Libuše, written by Bedřich Smetana himself.

Really easy way. Hop on the #22 street car at the “Prague Castle” stop and within about 14 minutes, get off at the “National Theater” stop. Streetcar #22 is actually the cheapest Prague sightseeing tour, you just have to sit and look at all the beauty around you as you are passing by.