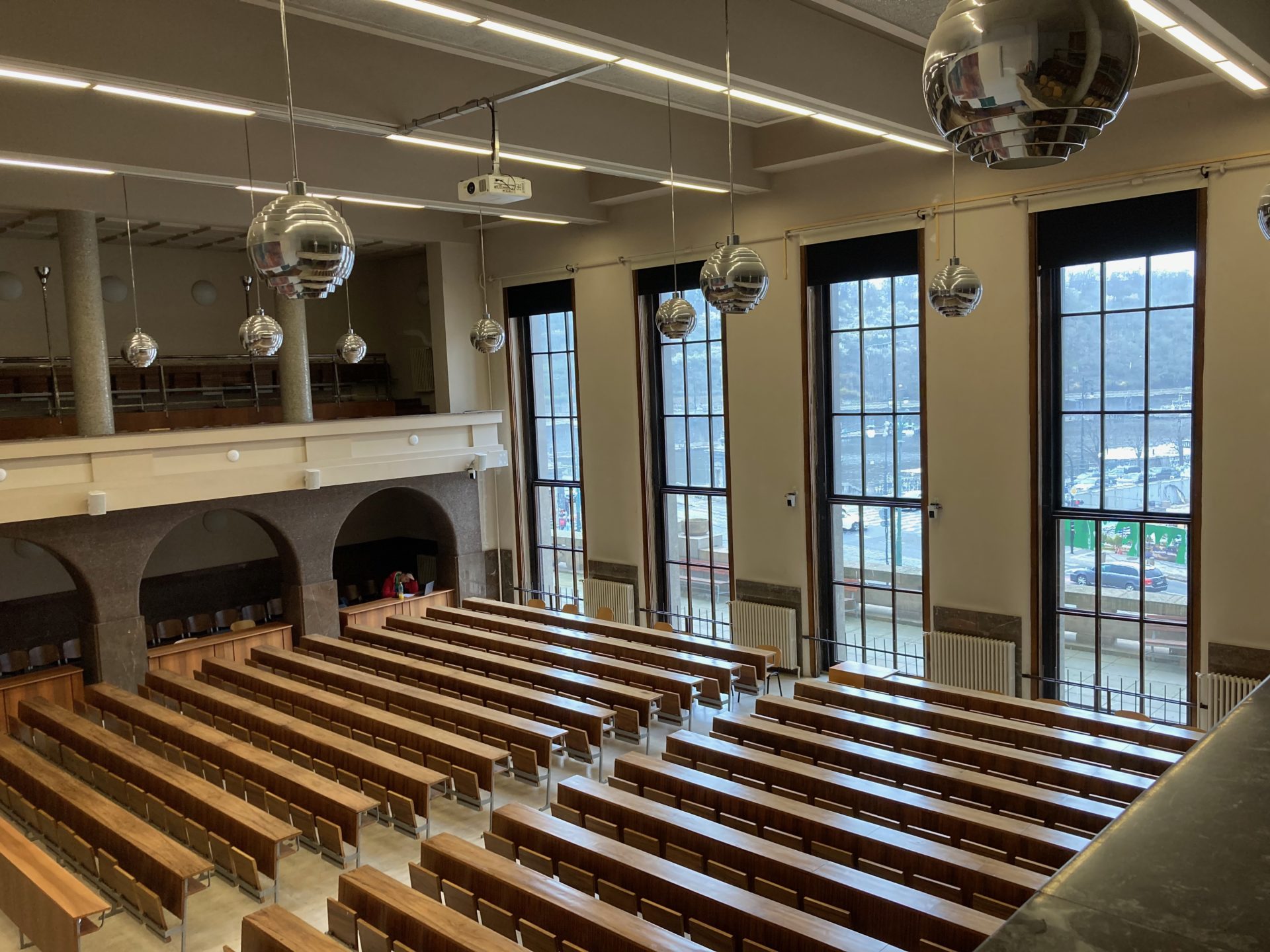 A monumental neoclassical building of the Faculty of Law of Charles University (the National Museum building on Wenceslas Square is also built in the same style) stands at the end of Pařížská Street across the river opposite Letná and in sight of Prague Castle and Straka’s Academy, which is the seat of the government.

The Faculty of Law was one of the four faculties of the University when it was founded in 1348 (along with the Faculties of Liberal Arts, Theology and Medicine). At the beginning of the 20th century, the Faculty of Law was still housed in the Karolinum – however what was sufficient in the 14th century was no longer adequate more than half a millennium later. Therefore, as early as 1907, the university management was considering the construction of a separate law faculty building.

After redeveloping of the Jewish ghetto Josefov, a plot of land by the river became available. Here two law faculties were to stand opposite each other – the other was to be the faculty of the German University. And although this university operated in Prague until 1945, the building of its law faculty was never built.

The building of the Czech faculty was built in 1924-1931 according to the design of architect Jan Kotěra, after whose death the project was completed by architect Ladislav Machoň, who worked out the project down to the smallest details, many of which are still in common use in this listed building.

The facade is dominated by high windows – behind them is the largest room of the faculty, Hall 100 – Collegium Maximum, which can accommodate up to 560 people. Apart from the fluorescent lamps, all the furnishings are original – wooden benches, mosaics on the arches, lights called wasps’ nests and a large tapestry on the wall opposite the windows.

The central area of the building is the atrium with a glass ceiling, which is called the pool. On the three floors, galleries run around the perimeter of the atrium, giving access to classrooms and offices.

On the third floor is lecture room number 300, the Amphitheater. Here, the students’ desks are built in a semicircle, and the auditorium also has a glass ceiling. All the furniture in this auditorium is also original, i.e. a hundred years old.

* During the war, the building housed the SS headquarters, which was quite a logical choice because the Na Františku Hospital, whose entrance is barely 200 meters from the school, served as a military infirmary for wounded Luftwaffe pilots.

* The rector of the German University, Fiedrich Klausing, resigned in the summer of 1944 and subsequently shot himself because his son was involved in the assassination of Adolf Hitler on 20 July 1944.

* The faculty building has been used many times for filming, both Czech and foreign films. For example, the scene of the meeting between the writer Karel Čapek and the students in the film Man Against Destruction takes place in the atrium (by the way – the film is great and the actor Josef Abrhám portrayed Karel Čapek in it absolutely exactly). In the Genius: Einstein series, the faculty building was the seat of the FBI.

If you like this beautiful building, you can enter and take a look. It is open to the public. And once you’re there, you don’t have to go up the stairs, but you can take the paternoster elevator. There are 28 of them in various schools, offices or banks in Prague. Probably everyone asked themselves as a child – what would happen if I didn’t get off on the top floor? Will I go upside down then?

You can see in the video what will really happen. 🙂