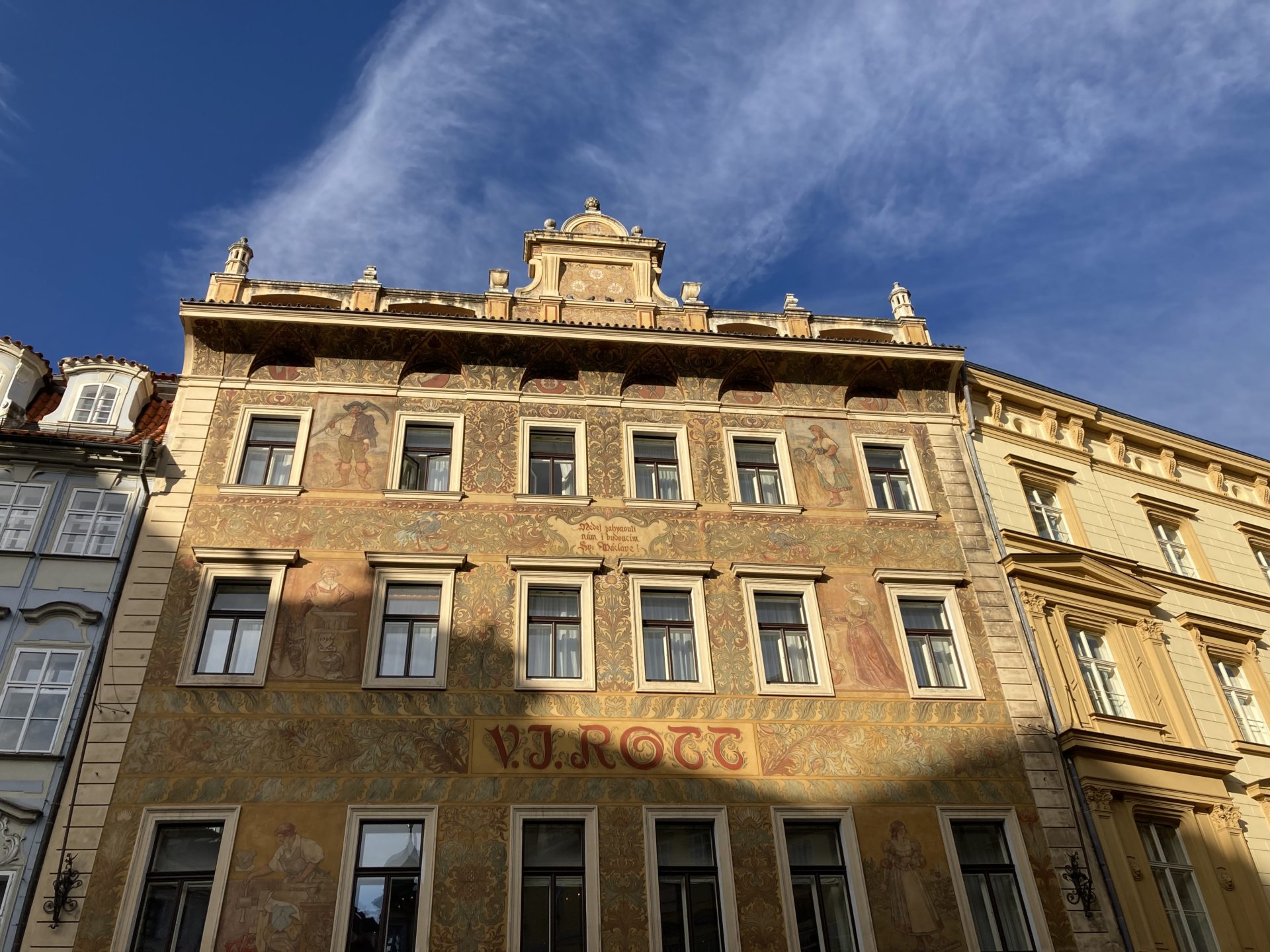 Malé náměstí (Small Square) or Malý rynek (from the German Kleiner Ring; “rynek” is the archaic Czech name for a square) is a small triangular square that adjoins the Old Town Square so closely that it could seem to be part of it. One of the houses standing in the square is a house that has V. J. Rott written in capital letters on it, which is why it is also called the House at the Rott.

In the past this house had many other names. At the Ostriches (since 1405), At the Three Golden Roses, At the Three Sheaves, and several others. At the end of the 15th century, it was called Pytlík`s House, after the owner Jan Pytlík, who is known for having participated in the first printing of the Czech bible, called the Prague Bible (1488).

In 1850 the house was bought by the family of Vincenc Josef Rott. His son Ladislav then had the house rebuilt as a department store at the end of the 19th century. Therefore, various professions (blacksmith, carpenter, gardener) are displayed on the facade of the house, which is supplemented by the inscription “Saint Wenceslas don`t let us perish, nor our descendants”, which are the words of the Saint Wenceslas Chorale from the 12th century.

The author of the sgraffito is one of the most important Czech painters of that time, Mikoláš Aleš. It is known that he didn`t physically participate in the creation of sgraffito because he suffered from dizziness and therefore could not climb the scaffolding. He therefore created the templates according to which the sgraffito was created.

There was a famous ironmongery in the house, which had 170 employees and sold goods in the volume of up to 6 railway wagons a day, the catalog of goods had 70,000 items.

In 1948, of course, the house and the company were taken over by the Communists and the Rott family emigrated. However, the reputation of the store has not been diminished and the paradise of craftsmen and do-it-yourselfers was there until 1989. (The staircase to the first floor was wooden and when you walked it, it creaked very nicely.)

After the Velvet Revolution, the ironmongery at such a lucrative address was over. There was a delicatessen, a luxury glass shop, today there is a Hard Rock Cafe. However, the Rott`s ironmongery did not disappear, it is just in a much smaller store around the corner, in Linhartská Street.

Photo of the Bible
Photos of the interior of the house